Welcome to the Abbey of Saint-André

At the heart of the enclosure created by the walls of Fort Saint-André, which dominates Villeneuve-lez-Avignon (Gard Department), the royal Benedictine Abbey of Saint-André welcomes visitors to its magnificent terraced gardens and abbatial palace. A rare place that harmoniously combines the art of gardens with a mosaic of the heritage and rich history of the Languedoc and Provence regions since the 6th century, the Abbey is open for Independent visits or guided tours from March to November .

Art and music are also regular guests at the Abbey, offering special moments not to be missed. 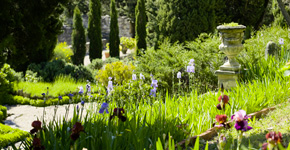 Classified among the most beautiful in France, the Abbey’s gardens unfold with old roses, Mediterranean natives, and olive and pine trees more than a century old among the remains of Romanesque style churches and tombs dating as far back as the 6th century. At the foot of the abbatial palace lies a parterre garden in 16th century Tuscan style adorned with ponds, vases and sculptures, and bordered by a pergola covered with wisteria and roses. From the heights of Mount Andaon, these terraced gardens offer panoramic views of the Popes’ Palace in Avignon across the Rhone River. 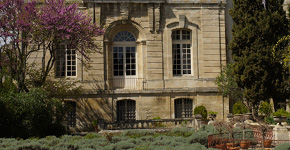 Both a spiritual and a strategic site, the Abbey has an extensive history. Originally the retreat of a woman named St. Casarie, then a Benedictine monastery, Saint-André became a royal Abbey in the 13th century, overseeing 211 priories nearby. Restored at the end of the 17th century by the King’s architect Pierre Mignard, the abbatial palace has retained its elegantly vaulted rooms, grand entry doors and monumental staircase.Émile Bernard’s murals as well as numerous collections of objects ranging from art to dinnerware to dolls may be seen during guided tours.

“Between Four Eyes” by Jean and Christine Viennet, from June the 3rd to the 6th of September